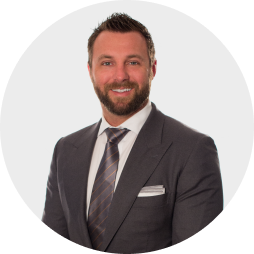 Danny Gay is the Founder & President of Oak Square Advisors. Prior to establishing the firm, he began his career in the financial services industry, building one client at a time. His focus was on helping his clients prepare for retirement by establishing retirement accounts under the IRA/403(b)/457 tax codes.

After a few years, his work caught the attention of BENCOR Retirement Consultants, who contracted him to provide advice to retiring participants of their 401(a) Special Pay Plans. Danny continued this contracted work with BENCOR for more than a decade, helping hundreds of retirees with their retirement and financial planning. Along the way, he built his private client practice to nearly $100 Million of assets under advisement. His continued dedication to his clients and their best interest lead him to launch Oak Square Advisors, a fee only advisory firm where integrity, trust, and transparency are the core guiding principles.

Danny and his wife Paige are residents of Winter Park, Florida where they reside with their son Carter and their daughter Kennedy.

See the Rest of Our Team

We’d love to talk with you.

CALL US TODAY AT (407) 599-2300 to start a conversation.  Or, If you prefer, click the “Book Now” button below to easily schedule your complimentary 90-minute initial consultation to sit down with our Founder, Danny Gay, AIF®, or Co-Founder, Josh Rose, AIF®.  We have offices in Winter Park, Sarasota, and Jacksonville (or we are happy to speak with you by phone or video conference).